Ukraine in the Moscow subway. Discussing photo of the updated mural at the metro station in Moscow 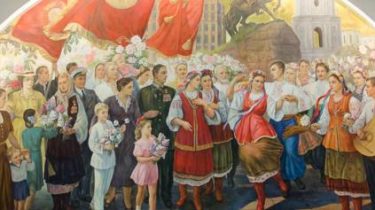 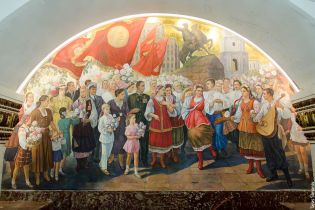 Within a few years Moscow metro stations “Kiev” authorities of the Russian capital carried out the restoration of the frescoes. Station dedicated to Ukrainian culture and traditions, so the frescoes depict the people of Ukraine in their national costumes, dancing, working in the field, and the like. The appearance of the frescoes, of course, became brighter, however, some ironic attitude to this restoration, because some of the paintings have changed some of the details.

In Odes on STN tripower namalowane nails Create a mural

So, in this mural the Ukrainian, who danced the traditional dance, is the national wreath painted shawl:

Someone in the network was joking, they say, the girl got married.

Well, dancer may, got married. And with flowers what happened?

The next mural depicts the Ukrainians, who work in the field. After the restoration has changed except that the brightness and saturation:

In this picture, Ukrainian girls-the kobzars were lucky, their wreaths remained in its place:

Special has not changed and the mural with Ukrainian students. It has become sharper, brighter and richer:

Much better after the restoration was the painting of Taras Shevchenko. On the old version of the picture of his face is almost invisible:

If you look closely at the following examples of restored work, significant changes in the story you will not notice:

This, however, artists have added another character – a little boy: