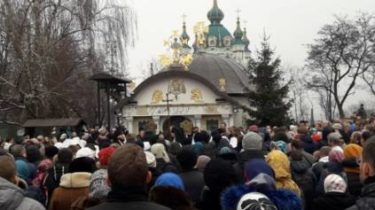 Near National history Museum of Ukraine in Kyiv gathered about a hundred activists who demand to demolish the chapel of the UOC of the Moscow Patriarchate near the remains of the tithe Church.

Protesters demand release of arrested Alexander Gorban and Alexei Semotiuk suspected of attempted arson of a religious institution of the Moscow Patriarchate. Activists also claim that the chapel at the Museum of the history of the IAF is illegal and subject to demolition.

It is noted that about 250 of the faithful came to the chapel for a service and asked the activists not to disturb them. Between supporters and opponents of the UOC-MP arise a religious dispute.

It is known that Alexander Gorban and Oleksii House, tried to set fire to the chapel on the night of 25 January. They were detained by militiamen. The men were arrested for 2 months with the right of Deposit of 2,2 million hryvnias.