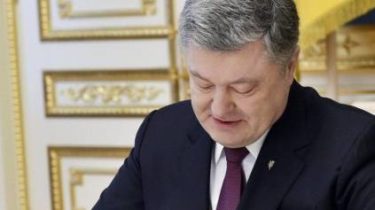 President Petro Poroshenko has signed the Decree “On appointment of scholarships of the President of Ukraine to the children of journalists who died when performing professional duties.” This is stated on the website of the President.

Scholarships will be to the daughter of the journalist Victor Gurnyak, Justin and daughter, Alexandra Chernikova Elena. Victor Gurnyak and Alexander Chernikov was killed in the antiterrorist operation.

Victor Gurnyak died 19 Oct 2014 from a mortar shell when under fire, took out the wounded in the district of 32-th checkpoint near the village of Bold Slavyanoserbsk district, Luhansk region.

22 Jan 2015 in the battle of Donetsk airport during the execution of the task of the military killed a soldier of the 9th company of the 3rd battalion of the 25th separate airborne brigade and Alexander Chernikov (call sign “Reporter”). During his lifetime he worked as a journalist in the TV program “Provincial Chronicles” on the 9th channel of the Dnieper.

Poroshenko discussed with the head of OSCE, the situation in the Donbas and Crimea