“He called my dead mother a bitch”. Shokin, the statement of Biden 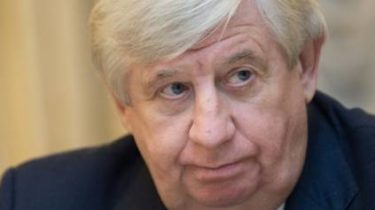 Former Prosecutor General Viktor Shokin said the former Vice-President of the USA Joseph Biden “special, in which nothing is sacred” after the American called him a “son of a bitch”.

“The fact that he called my dead mom a bitch, mean, man, nothing is sacred. I believe that a normal person who has a mother, not so to speak. It is my deep conviction. The mother is the mother. For any person it is the most sacred. If it dropped – I just feel sorry for this man. If he does not respect mothers, it just species,” – said Shokin.

According to the former attorney General, the words of Biden once again confirmed that his dismissal was unlawful and is under external pressure on Ukraine’s leadership.

“What does Biden, he actually interferes in the internal interests of other States, violating their sovereignty by imposing his personal will, under the guise that it is the United States of America. Biden’s statement once again confirmed that my dismissal was illegal under the pressure of this person who carried on the leadership of our country from the outside,” – said Shokin.

He also assured that the quote of Biden and video conferencing will be an additional argument in the courts about the illegality of his dismissal from the post of Prosecutor General.

In addition, the former attorney General suggested that Biden probably demanded his dismissal due to the activation of certain serious criminal cases, because he allegedly didn’t like it. Shokin said that “people like Joe Biden, were random in the politics and leave the history of the United States”.

We will remind, earlier former Vice-President of the USA Joe Biden spoke, as conducted tough negotiations with the Ukrainian government to fight corruption. In particular, he noted that achieved dismissal “son of a bitch” by the Victor from the post of Prosecutor General of Ukraine.