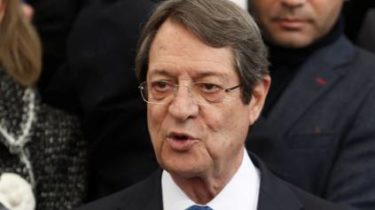 “I wish you prosperity and peace of the Cyprus people, as well as quick and peaceful reunification of the Cypriot state,” wrote Poroshenko in Facebook, calling Anastasiades a colleague and a friend.

The current Cypriot President, conservative Nikos Anastasiades won the second round of elections, receiving the support of 55,99% of the vote. For his opponent, supported by the left of the former Minister of health Stavros Malas – voted by 44% of voters.

Both candidates advocated negotiations on the reunification of divided Cyprus. The vote was held only in the Greek part of the island – the Republic of Cyprus.

Nicos Anastasiades second time he was elected to the post of President of the Republic of Cyprus, he has been in power since 2013.

Turkey will forever remain in Cyprus.

The third largest island in the Mediterranean sea since 1974, is divided into two parts after Turkey occupied the Northern part of Cyprus and established the self-proclaimed Republic. The Cyprus dispute is a major obstacle for Turkey’s accession to the European Union. The Greek part of Cyprus joined the EU in 2004. Bye. negotiations on the reunification of Cyprus fail.