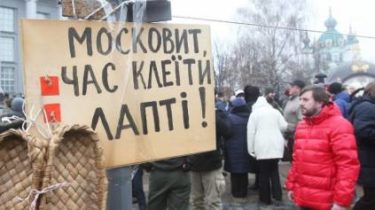 Hundreds of Kyivans gathered on 3 February near the remains of the foundations of the tithe Church in Kiev. People came with the requirement to demolish the temple, which built illegally priests Ukrainian Orthodox Church of the Moscow Patriarchate, said in the story TSN.Week.

The tithe Church was built by Prince Vladimir in Kiev in 989-996 years. It is considered the first stone Church of Kievan Rus. The building was destroyed in 1240. It is still unknown what form was this symbolic for our history, the temple.

The Foundation of this unique Church remains. He canned after the archaeological excavations, which ended in 2011. Scientists all the time, I had to resist the Moscow Patriarchate who was going to build on the remains of the new temple. They sought in fact to assert itself as a unified successor of the Christian Kievan Rus. The scandal has stopped the project

In Lviv burned down the temple of the Moscow Patriarchate

Next to the old Foundation of the UOC-MP was built a chapel. “Desyatinny monastery” – the so-called structure in the UOC Moscow Patriarchate. It was strange, because never in this place of a monastery was not. Last week this so-called tithe monastery is going through hard times. First came the activists C14 demanding to get out. Then at night, the building was doused with gasoline, then was the petition for the demolition of an illegal temple on the site of KSCA, which received the required number of votes. On February 3 the big rally of Kiev with the requirement to demolish the temple.

Now this place falls under the protection of UNESCO and is the buffer zone of St. Sophia, part of the nature reserve Ancient Kiev and is an archaeological monument of national importance. “It seemed that the territory has triple protection, but we see that in the XXI century such things happen, when in fact the laws are not respected. In violation of the law occur excavation and construction work,” – said the archaeologist Vitaly Kozuba.

Vitaly Kozuba party last archaeological expedition. From 2005 until 2011, he and his colleagues were digging up ancient foundations. He remembers the first time they had a tent. The priests of the UOC-MP has explained that it is for the accomplishment of the prayer for a few days. The tent stayed there and turned into the capital structure. The official speaker of the UOC-MP Bishop Clement says that this structure has all the documents and built legally.

“This building has a right to exist for many years. In 2001 or 2003, the year was the disposal of the President of Ukraine to build a chapel. And then there was the decision of the court, which also affirmed the right to exist of this building. I am therefore quite surprised to hear that there is a position that this building is illegal,” said Clement.

By the way, the President cannot make his decrees to allocate land. Besides, this decree is not it. Generally it is the statement of the speaker of the UOC-MP, Archbishop Clement is completely refuted by the fact that I could find.

In 2006, the Kyiv city state administration appealed to Kyivenergo, demanding to take action against unauthorized connection of the tent. “Given that the tent was set with violation of existing rules and regulations, and its supply is carried out with gross violations, asking to take urgent measures for the blackout” – said in the document.

Kublo the Russian occupiers. In Vinnytsia diocese under the Moscow Patriarchate brought the coffin

In 2007, the Inspections jointly with the Prosecutor’s office conducted an audit of the so-called chapel of the UOC-MP. “The documents certifying the ownership right or land use, including under lease from the religious community do not exist, which made the inspection”, – said documents.

That year, the attorney General wrote a letter to Viktor Baloga, the then head of the presidential administration. In it he wrote that building permits were not given, because the land was not allotted.

In 2014, on the spot seized a priest of the UOC-MP of the area came to the Commission from the Ministry of culture and is also recognized – no documents on the ground there, and the building was erected without documents. “As a result of the visual inspection established the fact of unauthorized construction of a building or structure (the so-called tithe monastery of the UOC-MP) on illegally occupied land, which belongs to the most valuable lands,” stated officials.

In fact, all these years, the authorities officially confirmed the so – called tithe monastery is squatting. But nobody did anything. Meanwhile, the temple lined with stone and a Foundation. It tried to legalize through the courts. In 2012, during the tenure of Viktor Yanukovych, the court recognized the right of property to the Church with the community. The then leadership of the National history Museum on site which was erected the temple, agreed with the decision. In fact, the court legalized the building, which had no right of land ownership.

But why they lost? Acquaintance with Tatyana Sosnovskaya, Director of national Museum of history, the territory of which the Moscow Patriarchate and built the so-called tithe monastery, give the answer. The official for two years and holds the position for two years actually stands in the way of illegal restructuring. She really is afraid for his own life. “I few people said (about the threat – Ed.). It’s true. Threatened by those representatives of the Church, which at the beginning came to me on my request and my request to provide the documents said that we all walk the earth. You have kids. They completely told me about my family,” – says the Director of the Museum.

Later, the driver of the rector of the Church Archimandrite Gideon Charon on the comments of the Director to be quiet at the Museum said Tatyana Sosnovskaya’s head cut off. “The driver ran the rector said that we your head cut off. And the children will forget your name and where you were,” she recalls.

In the Millennium of the assumption Vladimir Tatyana Sosnovskaya forbidden to install a podium and a cross on the remains of the foundations of distinci. After returning home late in the evening, her umbrella shattered from a bullet. “The monastery, whose name uses the word tithe, we have not addressed”, says the Director of the Department of religious Affairs of the Ministry of culture Andriy yurash.

Thus, officially the tithes monastery of unregistered and outside the law. The religious community of the Nativity of the blessed virgin, which operates in the illegally constructed temple near the remnants of the tithe Church that was according to a completely different address – str. Velyka Zhytomyrska street, 6-A, flat 9. On the outskirts of Kiev in Goloseevskiy district has a monastery with the same name – in honor of the Nativity of the blessed virgin. Its Abbot, Archimandrite Gedeon. He is the Abbot of the so-called tithe Monastery.

“Thus we can say that the registered address in the area goloseyevsky monastery de facto acts according to the address Vladimir, 2. Although there is no registration, there is,” said yurash.

Interestingly, the religious community of the Nativity of the blessed virgin Mary was at Michael Goykhman. The press called him a “viewer” of the former Prime Minister Arbuzov for banks.

After talking with the former leadership of the city, it became known that Goikhman from the Administration of President Yanukovych led the issue of restoration of the tithe Church. He was present at all the meetings. Watermelons also come here almost weekly, as the chief religious communities former party of regions MP Yuriy Miroshnichenko. The last ever offered here to build an Orthodox, UOC-MP.

These are the people the President lobbied for the construction of a temple on the remains of Desyatinny, blocking them a monolithic slab. However, public discontent with such barbarity has kept the government from official permission. To calm the situation – remains of the foundations were filled up. The UOC-MP is still keen to stake a claim for themselves this sacred place.

Lawlessness breeds lawlessness. This temple was built on lies, ignoring of norms of human conduct and as it turned out God’s commandments. The parliamentary Committee, which met this week, agreed that the Ministry of culture should apply to the court for demolition of the structure. Obviously, if the government does not deal with the question of unauthorized construction near the remains of the tithe Church in the near future will do it spontaneously unhappy people. Wrong you can’t fix the same. One of the patrons of the National Museum proposed at his own expense, without destroying religious buildings, to dismantle and to transport it to another location.