In the Internet appeared the video, which shot the wolf was playing possum and attacked the hunter 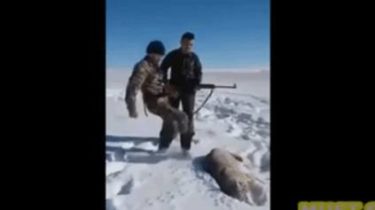 In the Internet appeared the video, which the hunters attacked by a wounded wolf which lay after the shot and pretended to be dead.

The incident occurred in Kazakhstan. In the video you can see how shot the wolf is lying supposedly dead in the snow and bleeding. One of the hunters approached him and kicked. After which the animal jumped up and attacked the man.

None of the hunters was seriously injured. But the beast, unfortunately, was killed.

Users under the video on YouTube write hunters, nobody will pity them and give them a thousand curses.

Meanwhile, as previously reported, in the Zhytomyr residents of the villages suffer from packs of wolves. Recently in the village Obihody pack killed a dog. And even day, the animals walking through the village, not afraid to get on people’s eyes. The villagers are afraid to go out in the evening and close at night in a stable economy. And the hunters, meanwhile, are preparing a RAID.