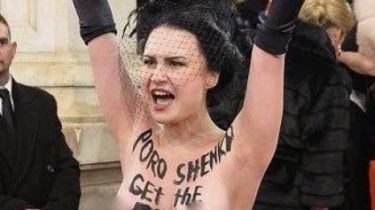 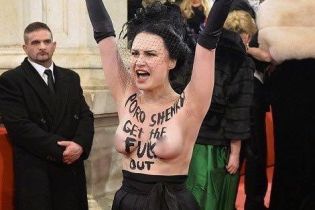 Femen Activist staged a protest against the President of Ukraine Petro Poroshenko at the Vienna ball in Austria.

This was reported on the organization’s page on Facebook.

Activist Alisa Vinogradova took to the red carpet and bared Breasts, on her body was written: “Poroshenko, get the fuck out of the Ball!”.

In Femen claim that the target of the attack was “to inform the high society of the inadmissibility of the presence of Poroshenko on aristocratic Banquet”.

“FEMEN demands from the Poroshenko to choose: either the oligarch or the President of Ukraine – the third is not given!”- said in a statement.

In comments to the Public in the organization said that Vinogradov bared his chest at the moment when Poroshenko was walking up the steps to the balcony.

Remind, the only foreign President, who was invited to the Viennese ball, turned out to be Petro Poroshenko. The Ukrainian head of state arrived in the capital of Austria with a practical purpose: Poroshenko met with President van der Ballena and the new Chancellor Sebastian Kurtz. He also invited the Austrian companies to the management of the Ukrainian gas transportation system.

Videoporoshenko urged the Austrian businessmen to invest in Ukraine

The President arrived to Austria to meet with President van der Ballena and the new Chancellor Sebastian Kurz. Petro Poroshenko has invited the Austrian companies to the Ukrainian gastransport management system. But most attention was paid to the situation in the Donbas and peacekeeping missions. 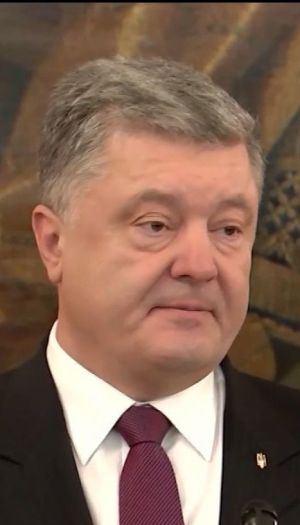