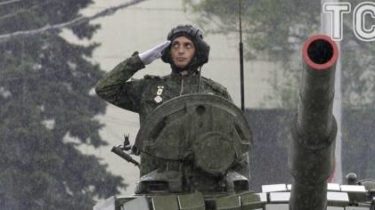 The leader of the terrorist group “DNR” in the Donbass Alexander Zakharchenko said that “the investigation has” established the murderers militants Mikhail Tolstykh (Givi) and Arsen Pavlov (Motorola).

It is reported resource militants “DAN”.

“Installed all the persons involved in it, some are arrested, but not all. The case will be finished this year”, – said Zakharchenko.

According to him, the suspects involved in the killing of both leaders of the militants – as Givi and Motorola.

We will remind, the chief editor of the Censor.NO Yuri Butusov said that one of the main leaders of terrorists on Donbass Givi has been eliminated by the Ukrainian security services.

Mikhail Tolstykh killed from a grenade launcher in his office in the headquarters of the terrorist battalion “Somalia”. A fighter came charging through the window. Givi buried in a closed coffin because of izurodovannye corpse.