Fighters 8 times violated the ceasefire regime in the Donbass 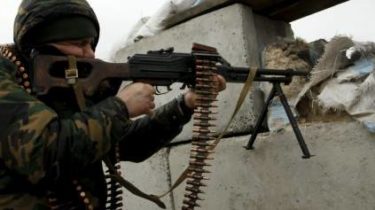 Donbas militants continued to shell the strongholds of the Armed Forces of Ukraine, especially in the dark.

According to staff, at the direction of Donetsk mercenaries from 82-mm mortars, weapons, infantry fighting vehicles and heavy machine guns fired at Ukrainian military positions near Talakivka.

In General, over the past day recorded 8 violations of the cease-fire. As a result of enemy shelling, one soldier of the forces ATO was not injured.

We will remind, in the afternoon on Saturday, February 10, fighters once broke the truce in the zone of the antiterrorist operation. The only shelling occurred near the village Lugansk in Lugansk area. Fighters more than an hour shelling Ukrainian military positions from 82-mm mortars and grenade launchers of various types.