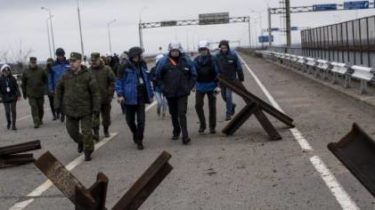 In the “DNR” in the direction of mini UAV owned by SMM OSCE, opened fire from small arms.

This is stated in the report of SMM of 10 February.

“While patrolling at 300 m West from the Western edge of the settlement may day (not controlled by the government, 68 km South of Donetsk) the observers heard 11 shots from small arms 1.5 km East-South-East. According to CMM, it was fired in the direction of the mini-UAV, which at that moment flew about 1.7 km on Southeast from the position of observers,” – said in the report.

As noted, the members of the patrol mission took refuge in armored vehicles and took away the drone, which was not damaged.

In addition, observers reported that on Friday, February 9, at 10:41 a representative of the ORDO made warning shots because the patrol was halted in the area, “a place to stay not permitted”.

“It was about 500 m West of the settlement Verhneuralskogo (ex. October, outside the control of government, 29 km North-East of Mariupol). Patrol missions stopped on the road, which runs between the checkpoints of the Ukrainian Armed forces and armed groups”, – said the OSCE.

We will remind, for the past day fighters 8 times violated the ceasefire regime in the Donbass. As a result of shelling none of the Ukrainian military was not injured.