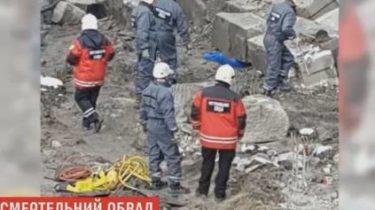 The tragedy occurred on the construction site on St. Cyril, says TSN.16.45.

According to passersby, first there was a loud Bang, followed by the sound of a rockslide. Into place there arrived police, rescuers and an ambulance. However, the services of physicians are not needed – a worker died immediately.

As it became known later, killed a schoolboy born in 2001, who went to school No. 197 in Sofiivska borshchagivka. At the time of the quarantine guy in school worked in construction – were engaged in pumping water.

A few hours rescuers apart the rubble to get the body of the deceased. In the former brewery is now erecting a high-rise building with underground Parking. Deep pit builders overlaid with concrete blocks, which eventually collapsed. What was the cause of the collapse, now find out the investigators.