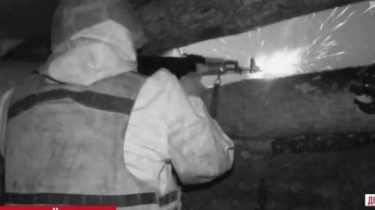 Occupants open fire prohibited weapons on the coastal front near Mariupol. Ukrainian Marines say that the enemy has picked up markedly in recent times, says the story TSN.19:30.

“The battle lasts about 15 minutes on average. BMP leaves, shoots, per day may be two or three zeroing”, – said the fighter with a call sign “Casper”. Marines do not hide the fact that with the exception of rocket artillery arrives now all. “Hnutove, Water was several times 82 s mortars. 120 s mortars on the settlement of Shirokino” – said the press officer of the brigade of Marines Alexander Immortal. The fighter “the Viking” on the front not for the first time and there is nothing to compare – he claims that last year at the same time in the Azov sea was calmer. “At the same time their “art” quiet! And now they do not hesitate to open fire day and night. There is information that they intend to run DRG,” he says.

On the anniversary of the signing of the second Minsk agreement at the front killed one Ukrainian soldier, another wounded. So far Moscow has not fulfilled any of their points, says Ukraine’s MFA. “Russia needs a war and destabilization in Ukraine”, – wrote the press-Secretary of the foreign Ministry Marian Betz. Almost all of the front line with militants continued shelling with heavy weapons, which, according to the Minsk agreements were supposed to take. 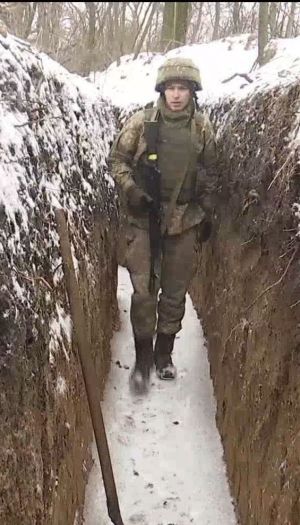 The Marines say that their position is very important for a successful defense of an entire division, so too does the “rattle” weapons of the occupiers do not allow reply without hesitation until the enemy stops firing. “Post like this, well let’s just say we have a important direction. Therefore, we immediately give back, because the opponent can choose to shoot at us, and under his fire can climb DRG”, – explained the “Viking”. The military did not lose a wink of sleep, and in between fighting the take up crowbars, shovels and hammers and hard to dig new shelters and transitions. The depth of trenches and fortifications reliability directly affect the lives of soldiers, so digging will not cease, but the material for the shelters, they do not have.

Force soldiers get from the delicious field kitchen and communicate with family. According to the soldiers, peace and understanding in the rear is no less important than weapons in the hands of the defenders of the country. “If by regular attacks to get out and give the answer – it requires character,” says the fighter Yuri. And the enthusiasm of the military get from their loved ones, their support and love.