Ukrainian army in 2017 moved in the Donbas 10 km – Turchynov 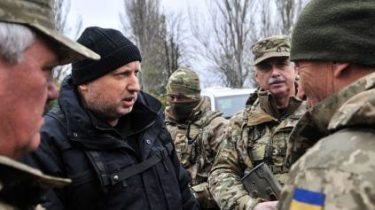 The Ukrainian military on some parts of the front line in the Donbas in 2017 moved 10 kilometers or more.

In an interview, the Public was told by the Secretary of the national security Council and defense of Ukraine Oleksandr Turchynov.

While in no way violated the Minsk agreements. All the villagers returned to Ukraine. Local ask to reconnect with the controlled territory. They say the checkpoint is valid from eight in the morning until five in the evening, and it gets to move freely. “It is nice to say that and 2016, and 2017 years differed from the past because we didn’t give a single meter of their land. Moreover, our units in some areas have advanced more than 10 kilometres and improved his position. It’s a fact,” he said.

According to Turchynov, all attempts of the militants and the Russian military to change the situation on the demarcation line “fiasco”: they are unable to return none of the settlements and are unable to move forward.

“Today in the occupied territory there is no force that could change the line of differentiation which developed today,” said Secretary of the NSDC.

Recall that in late January – early February it became known about the release of the Ukrainian military two villages in Luhansk oblast – Novoaleksandrovka and Katerinovka.