In Kiev the driver of the BMW on the sidewalk, knocked a woman to death 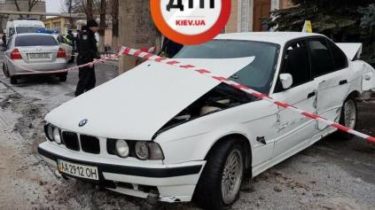 Fatal accidents in the capital. In one of the districts on the left Bank, the driver has not coped with management, flew the pedestrian area and killed a woman, according to TSN.12.00.

The new building, located at the array center, the journalist of TSN has learned that white BMW overtaking on a slippery road lost control and he was carried to the sidewalk. There he collided with a parked “Opel”, from which it again rejected on some tens metres on a pillar, near which passed the 34-year-old woman. The collision could not be avoided, has been the hitting and the woman died on the spot.

Tin in Kiev on the street Khotkevych G.: ice and the deadly transition. Previously, due to slippery road, the driver of the car…

The driver of the vehicle, according to police, a little more than 20 years, he was without odor of alcohol, but in a state of shock. A man was taken to the clinic for examination.