Putin told the details of his conversation with Poroshenko 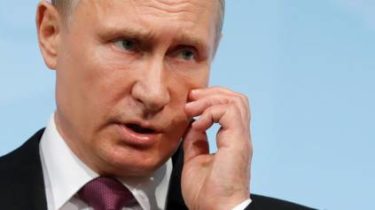 The presidents of Russia and Ukraine Vladimir Putin and Petro Poroshenko during a telephone conversation I also discussed exchange of prisoners of war, “there is no alternative implementation of the Minsk agreements” and the crash of An-148 in the suburbs.

“Indeed, the day before yesterday (12 February – approx.ed.) was a telephone conversation between Poroshenko and Putin. Poroshenko expressed condolences in connection with the Russian plane crash, expressed a desire to help with the investigation along the line of the Ukrainian aircraft manufacturer”, – he said.

According to Peskov, Poroshenko also offered to continue the exchange of prisoners between the conflicting sides in Donbas, stressing that the two sides “once again focused attention on the necessity and inevitability of the implementation of the Minsk agreements.”

In addition, Putin’s press Secretary confirmed that the initiator of the conversation was the Ukrainian President.

We will remind, last date a phone conversation leaders “Channel four” took place on 24 July 2017. It was attended by the President of Ukraine Petro Poroshenko, the President of Russia Vladimir Putin, President of France Emmanuel macron and German Chancellor Angela Merkel.

From October 2014, the Administration of the President of Ukraine announced about the bilateral talks Poroshenko with Putin, but they were periodically conducted. In particular, in March 2017 on Bank confirmed the two telephone conversations between the presidents of Ukraine and Russia since the beginning of the year.

In January 2018, the press Secretary of Russian President Dmitry Peskov said that contacts between the presidents of Ukraine and Russia “have a place”. In the Administration of the President of Ukraine in his turn, reminded that Poroshenko more than three years had not met with Putin in a bilateral format. On other forms of communication between the presidents in AP then remembered.