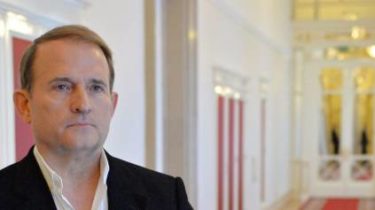 The militants “LNR” and “DNR” made in lists to exchange 18 Russian citizens who are serving sentences in Ukrainian prisons.

This was stated by the representative of Ukraine in a humanitarian sub-group of the Trilateral contact group on conflict settlement in the Donbass Viktor Medvedchuk in an interview with “Novaya Gazeta”.

“Now the representatives of Donetsk and Lugansk again made all the citizens of Russia (18 people, which I mentioned earlier) to their lists in exchange. We are talking about the most complicated category of candidates to the exchange”, – he stressed.

According to Medvedchuk, the problems with liberation there is the Ukrainian side.

“Now the negotiation process is much more complicated. I hope that the Ukrainian government will first put the question about the liberation of our citizens, not to debate about who can or can’t release us. Ukraine has a task to return all the. And we must do everything possible and impossible”, – he said.

Also Medvedchuk assured that separate negotiations are ongoing regarding detained in Russia Sentsov, Sushchenko, Karpyuk, Fungus and other Ukrainians.

“I can assure you that these negotiations have never stopped, and about Sentsov. They go and Kolchenko, Karpyuk, Cliche. In relation Sushchenko are preliminary talks, he’s not convicted yet. Negotiations go constantly, there are various proposals, which, of course, I can’t talk about publicly. But hope for a positive result should stay. I believe in it”, – said the representative of Ukraine in the Tripartite contact group to resolve the conflict in the Donbas.

As previously reported, President of Ukraine Petro Poroshenko said he was willing “to let Russian soldiers who came to our earth as a killer to be released Sushchenko”. He also added that Ukraine wants the release of all Ukrainians detained in Russia.

Remind, On 27 December in the Donbass held a first exchange of hostages. Then, from the occupied territory returned 73 Ukrainian. Now, according to the SBU, the militants are 108 more of our citizens.