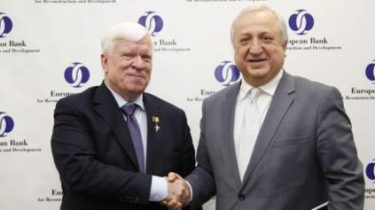 The ceremony was held in the office of the EBRD in Kiev on 15 February, the agreement was signed by the head of the EBRD office in Ukraine Sevkedilen and General Director of “NIBULON”, Hero of Ukraine Oleksiy Vadaturskyy.

The agreement is part of a larger proektstrojjcentr company and the Bank in the framework of financing 200 million U.S. dollars. The project aims at the development of agricultural infrastructure and internal waterways of Ukraine.

“With this project we not only help the company “NIBULON” in General and Ukraine in increasing and expanding opportunities to export grain and agricultural products. We do this in a stable ecological way, by placing these freight flows from rail, from road to river road. Myosone and understand the importance of inland waterway development and increase their throughput,” said Sevki acuner, commenting on the importance of the agreement for Ukraine and the EBRD.

He stressed that the EBRD was impressed with the approach of the company “NIBULON”, which does not provide for the monopolization of the market and aimed at development of river and agricultural infrastructure for all its participants.

“I am particularly proud of the fact, and am very pleased that although the company “NIBULON” wants to develop in this area and be one of the leading players, it does not set itself the goal of achieving a dominant position in this sector. That is, in addition, this initiative will be realized also taking into account the need for the establishment of initsiirovaniya this market in a competitive way financially stable and reliable way,” he added.

Sevki acuner also stressed that the agreement is a continuation of many years of fruitful cooperation with “NIBULON”. “We signed it a day later than I was supposed to sign. Had to sign on February 14, on Valentine’s day that it symbolized the love story that exists between us and this company. Seriously, I am very proud of, I personally and as a representative of our Bank and nasionalisasi, that are signed already the fifth project with this company,” said S. Acuner.

According to him, the development that Ukraine demonstrates in terms of the cultivation of grain, shows that there is a pressing need for such projects to further razvitymi infrastructure.

“The role of the company “NIBULON” in this process, in this development is obvious to all and for the EBRD in particular. So I would like to thank You not only for what You have chosen EBRD as a partner, but for what You are doing svevlad in these processes. And You do it steadily and reliably,” – said S. Acuner, addressing Alexey Vadatursky.

In turn, the General Director “nibulona” thanked for the possibility of long-term reliable cooperation with the EBRD.

A. Vadatursky reminded that the company segodneishee 2 million tons of Elevator capacity. “Someone sees us agricultural company. Others of us appreciate how large the shipping company, which is in Ukraine the most modern fleet, built from the Ukrainian metal that goes under the Ukrainian flag, which is served by Ukrainian companies, the Ukrainian people,” he added.

“We know in the world as a representative of Ukraine as a Ukrainian company, which supplies agricultural products to 64 countries around the world. So I am very grateful that I have the opportunity: to plan the work for the development of our company for the next 7 years of cooperation with the European Bank for reconstruction and development”, –said General Director of “NIBULON”.