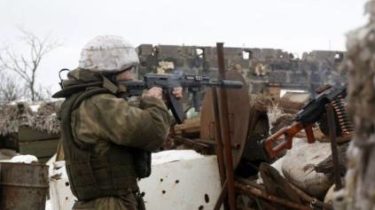 Representatives of the special monitoring mission The OSCE in the Donbass called Wednesday, 7 February worst day of fighting in terms of the number of violations of silence regime.

This was announced by first Deputy Chairman of the mission Alexander hug.

“Last week, the Mission observed extremely unstable situation in the East of Ukraine, in particular, in the Luhansk region, where on 5 February, there were no reported violations, 7 Feb – more than 3 thousand,” says hug.

Russia supplied the militants in the Donbass 2.4 billion cubic meters of gas. Ukraine to pay for it will not

He added that during the day, 7 February, the SMM recorded 677 cases the use of heavy weapons, as well as 360 beats shells reactive systems of volley fire. This is the highest figure since March last year.

Also in the CMM report on the promotion of the Armed forces of Ukraine forward in the area of Novoalekseevka. on both sides of the demarcation line observed 15 kinds of prohibited weapons.

Just in the past week, there have been about 8 thousand violations of silence regime using heavy weapons, as well as a large number of mines in Rheine Shirokino and Water.

Police uncovered the murder of relatives of the godfather of Yanukovich: suspects were fighters of “Donbass”

We will remind, for February 15, one Ukrainian soldier was killed another received a combat injury.