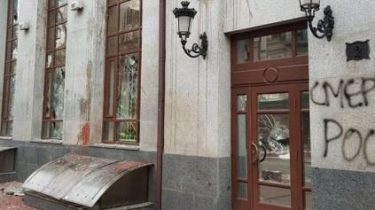 Head of the representative office of Rossotrudnichestvo in Kiev Eleonora Mitrofanova said about the serious damage caused by the attack of nationalists on Sunday, February 18.

“Today, after the “Maidan”, 70 people went to our office, suffered quite extensive damage,” she said, “Interfax”.

According to her, the building has broken Windows, it’s splattered with paint, but people have not suffered, as from February 17, no one in the building.

Representatives C14 broke into the building of Rossotrudnichestvo in Kiev

The “Rossotrudnichestvo” has no plans to stop working in Kyiv. According to Mitrofanova, the question of further work of the building and security will be resolved in the next few days.

“I think that to continue working. See more in the next couple of days,” she said.

We will remind, on Sunday, February 18, after the “March for the future” activists smashed the facade of “Rossotrudnichestvo”. The activists broke away from the main crowd and walked to the building. Young people threw stones, paving stones and eggs at the façade of the building, spilled paint, broke Windows and wrote “Death to Russia” at the entrance and left.

The police said that the riots in the center of Kiev will be the responsibility of the organizer. While the police did not detain any participant of the stock, there is also no information about the victims.