In Kiev law enforcement officers staged a silent flash mob outside the court, release the arrow according to police 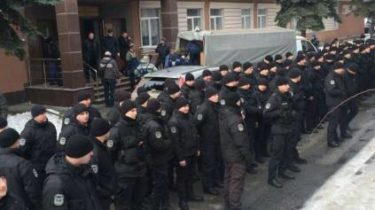 In Kiev, near the building of the Shevchenko district court, dozens of law enforcement officers came out to protest.

It is reported by TSN correspondent Anton Strashko.

Several dozen soldiers of steel back to the court and stood about 10 minutes.

Thus they are protesting against court decisions in respect of participants in the riots that occurred during consideration of a measure of restraint to the mayor of Odessa Gennady Trukhanov.

Note, these officers are not on duty, and held a rally in their own free time.

We will remind, the Shevchenkovsky court of Kiev released on bail of people’s deputies of the participant ATO Alexander Fedorchenko, who is suspected in the deposition of gunshot wounds to the police. He was detained on 15 February near Solomenskiy district court of Kyiv. That day it heard the case of election of a measure of restraint to the mayor of Odessa Gennady Trukhanov, who is suspected in a multimillion-dollar corruption. The mayor then the court released on bail people’s Deputy from BPP. Between activists and police clashed. One policeman fired a pistol at his feet.

In connection with the court decision the Minister of internal Affairs Arsen Avakov proposed to end the protection of the courts by the National police and the National guard. He also addressed a demand to the Supreme Council of justice to respond immediately to such actions of the judge and to the Prosecutor’s office and the court immediately to make a fair decision on the fact of gunshot wounds to the police.

The premise of the Shevchenkovsky court of Kiev guarded by a caretaker, until there is a “rotation” of national guardsmen

In turn, the Chairman of the High Council of justice Igor Benedik said that the Minister of internal Affairs Arsen Avakov pressure on the judicial branch.