NABOO wants to attract Nasirov in court for bribery 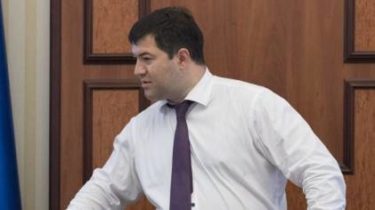 The national anti-corruption Bureau of Ukraine investigates criminal proceedings on the grounds of bribery against a former head of State fiscal service of Ukraine Roman Nasirov.

This is stated in the decision of Solomenskiy district court in Kiev on 13 February 2018 on the temporary access to things and documents, published on Monday, February 19.

“The national anti-corruption Bureau of Ukraine makes pre-judicial investigation in criminal proceedings brought in the Unified register of pretrial investigations on No. 52017000000000717 of October 25, 2017 on the grounds of criminal offense under part 4 St. 368 Criminal code of Ukraine (bribery),” – said in the document.

As noted, the NEB has “reasonable grounds” to believe that the former head of the State fiscal service Nasirov received improper benefit for assistance in obtaining VAT refunds.

However, according to the investigation, Nasirov could get on account of the RN Group Limited company through the company UAI-Trade SA “reward” for assistance in obtaining the reimbursement of value added tax to LLC “Ukrainian agrarian investments”, which CEO, the former head of DFS was until 2017.

On the basis of materials of pre-judicial investigation the court has granted the seizure necessary to the investigation documents.

Recall, January 31 the Cabinet decided to dismiss the head of the State fiscal service. Earlier, Finance Minister Alexander danyluk has announced that it has submitted to the Cabinet the appropriate view.