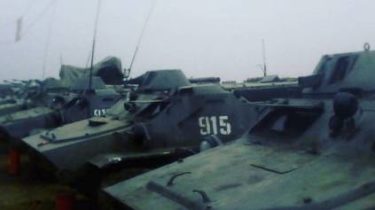 Militants from the occupied part of the territory of Donetsk region went to Russia to automotive and armored vehicles.

This was stated by the speaker of the Ministry of defense of Ukraine on ATO Dmitry Gutsulyak during a briefing, referring to the information of the Main intelligence Directorate.

“It is established that on February 18-19 this year in the Russian town of Kamensk-Shakhtinsky in Rostov region sent fighters separate motorized rifle regiments of the so-called “1st army corps of” Russian occupation troops for getting automotive and armored vehicles”, – he said.

According to the speaker, from the territory of the Russian Federation continues, “the full implementation of the occupation forces”.

Recall that the militants over the past day made 12 the impact of attacks. Killed one Ukrainian soldier, one soldier was injured and another received a combat trauma. In addition, during a combat mission in the detonation of an unknown explosive device injured two Ukrainian military.

Besides the Pro-Russian mercenaries shelled residential houses in the village Zhovanka, whereby one of them is burned.

The main intelligence Department of the Ministry of defense of Ukraine