To open fire on neighbors, ex-Atoshnik prompted comments that he was not at the forefront 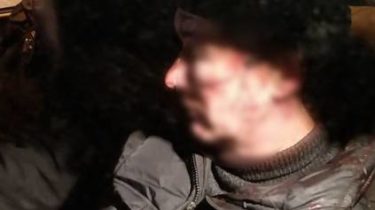 In the Kyiv region residents Zalesie witnessed gunfire, grenade explosions and shots from a pistol. Thus ended the quarrel of the ATO with its neighbor. Wounding two people, an armed man tried to kill police officers who arrived on scene. Sagittarius even tried to escape in a police car. In the end, drunk and dangerous, the man was detained. Two neighbors with injuries was taken to hospital, according to TSN.16.45.

“He made a characteristic gesture pulled the ring from the grenade and threw it in our direction,” so patrolman reconstructs the events in the village.

Blood on the snow, on a police car, under the fence. The gate traces from the explosion of grenades, a dozen cartridges of caliber 5.45 scattered across the street. This dude had an altercation with a neighbor.

“A neighbor had a fight, threw pitardu, and then shoot a machine gun and all” – remember the witnesses.

Firecrackers were combat grenades f-1. In manholes found a Kalashnikov rifle, during the detention of seized revolver. The local “Rambo” made a memorable night for local residents.

For Gennady this horror is not yet over. He and his wife were in intensive care. He grenade wounds of the sternum and a broken hip. The woman hooked the leg.

“I don’t know what is, thought, Picardy, and his wife says he shoots, he shot me on the leg the blood,” says the victim.

Why the neighbor opened fire on defeat Gennady realize. Once quarreled over the war in the East.

“When we say that a real Atoshnik on the “front end” is, at checkpoints. He parstav to talk to me is it was a month ago,” recalls wounded.

Former Atoshnik grievances could not stand, took out his hidden Arsenal, before he drank.

“I knew it was gonna happen 100 percent. There is a category of people who have f*ne the child did not finish the war” – says Gennady.

Play voynushki in the coming years to the detained man does not Shine. For possession of weapons, assault on police and attempted murder arrow faces up to 10 years in prison.