From Ukraine to work left over one million people: where they were going and why don’t want to go 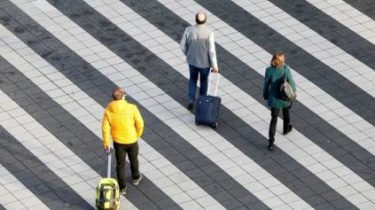 In 2017 one million Ukrainians went abroad.

Most of them left the country in search of work, says in “snidanok z 1+1”. According to the companies, which employ abroad among migrants is twice vitrocla the proportion of students and older people.

Most citizens of Ukraine in Poland, the Czech Republic, Hungary, Italy and Germany. They go there not only for the earnings.

At the moment, an average of 100 of thousands of Ukrainians monthly become migrant workers, said the Minister of foreign Affairs Pavlo Klimkin. Dozens of buses in the EU leave daily from the bus stations in Kiev, and most of the Western regions.

“The number has increased significantly. Go men, women, couples, students. A lot of people after age 50 who want to work”, – said the Manager of the company’s employment abroad.

90% of Ukrainians get a job that does not require special qualification. Often people in the short term we have to learn a new specialty:

“Do not expect that he was in Germany and you here will be manna from heaven. ‘ve got to prove yourself. You can come one month to earn, and in the second month to go home.”

Today, a third of Ukrainians a better future connects with the moving to another country. Two years ago this figure was almost halved. The chance to successfully find a job then was higher.

Sergei, who had lived in Bukovina, now lives in Spain. The feeling of freedom and the opportunity to travel a lot were decisive in the decision to move.

“Emigration – a new life. Feel free, because there are no borders in the EU. Buy a plane ticket. Don’t think about the visa. The Spaniards are very tolerant to foreigners,” said the immigrant.

It took three years to Sergei to confirm the diploma and language learning. He now has a dental clinic and decent by European standards, earnings. He’s not going to return to Ukraine.

“As I started to work, health insurance provided. I don’t think it should be if something happens. I do in Spain do not follow the exchange rate. The Euro does not affect the prices in the supermarkets,” added the man.

According to analysts of the International HR portal HeadHunter Ukraine has started staff shortages. Therefore, more and more Ukrainian companies lure professionals large salaries. Over the past year has gained an average of 10%. Analysts predict that in 2018, this growth will be even greater.