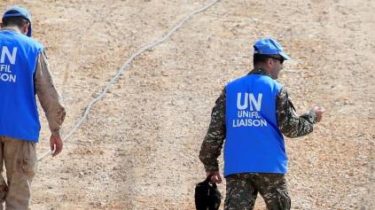 Representative of the President of Ukraine in the Verkhovna Rada Iryna Lutsenko said that the contingent of the UN peacekeeping mission in the Donbas could reach 30 thousand people, among which 20 thousand directly “blue helmets” and 5 thousand policemen.

She stated this to journalists in Kyiv, reports UNIAN.

According to her, the important issue after the establishment of the joint staff will coordinate and cooperate with probable peacekeeping UN mission in the Donbas.

“Proposed and today is a conversation, it’s not official data, but there is talk of a possible contingent of 30 thousand soldiers, among them 5 thousand can be police, 20 thousand may be “blue helmets”, in fact, the peacekeeping forces and some should be on the border between Ukraine and Russia”, – said Lutsenko.

She stressed the importance that “future peacekeeping mission was deployed throughout the occupied part of Donbass is not only for the protection of SMM OSCE, but to be on the uncontrolled part of the border in the Donbass to stop promoting weapons on Ukrainian territory”.

“The conversations are about the possible composition of the peacekeeping mission, this mission will consist of countries that do not belong to any security Alliance”, – said the representative of the President.

So, Ukraine and its Western allies to offer a full-scale UN mission, which will be throughout the occupied territory of Donbas, including the border with Russia, and will guarantee security in General, not just for the OSCE observers, as well as take control of the weapons warehouses of the Russian hybrid forces in the occupied territories, will oversee the disarmament of illegal armed groups, and the like. It is proposed to introduce 20-thousand peacekeepers and 4 thousand policemen. Russia rules out this option, which would reduce its influence in the occupied territory, and wants the peacekeepers were only on the line of contact.