The militants have doubled the number of attacks, killing Ukrainian soldier. Chronicle of the ATO 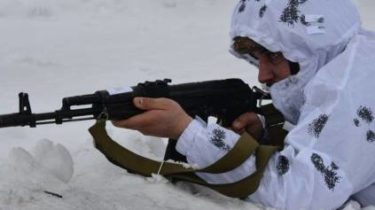 For Thursday, February 22, in the area of ATO in the Donbas the militants carried out 19 the impact of fire is twice more than in previous days. At the time they killed one Ukrainian soldier, another wounded.

On Lugansk the direction of the main fire activity of the militants were concentrated in the area of Svetlodarsk arc. In particular, they used a 120-mm and 82-mm mortars and an Arsenal of infantry weapons near Luhansk and Trinity. A few min caliber 82 mm exploded near the Crimean and Katerinovka. From heavy machine guns and small arms militants were aiming at the Ukrainian positions near Zaytsevy and Novoluganskogo and rocket-propelled grenades and machine guns – close Mladosovice and Lozovoy. Also from APCS and small arms fire of the defenders of Novoaleksandrovka.

On Donetsk the direction fighters fired from mortars of different calibers at the Ukrainian positions near Novotroitskoye and Sand.

Meanwhile, in the Ukraine stated that completed the ATO and transferred to another military operation in the Donbass.