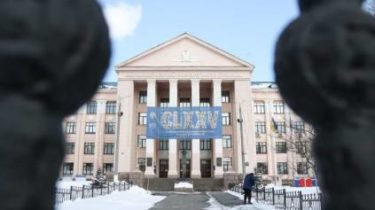 In Kyiv the guards of the medical University. Bogomolets in the eyes of the people beat the journalist, who was filming a documentary about the strike, and took away his belongings and documents.

About this on his page in Facebook reports “the Investigation.Info”.

According to the student Ekaterina Pavlovskaya, he asked of one of the illegally barricaded building of the University, how to get into the University and why the lessons are still there.

In Kiev, the student jumped from the bridge Paton allegedly because of a conflict with the Dean, the rescuers looking for the body

“The guards dragged him into the room through the window and began to beat feet. On the demand of activists and students to stop beating – closed window curtains. Even the arrival of police did not stop the bullying, Yatsenko continued to mercilessly beat him”, added the student.

Severely beaten journalist Oleg Yatsenko, who was filming a documentary about a strike at the medical University Bogomolets. …

After about 40 minutes the man was released, but took the documents, a backpack with phone and camera and crushed the glasses.

After that, the students and employees of medical University declared an indefinite strike, and the Ministry of health urged not to succumb to provocations and not to disrupt the educational process.