The people’s Deputy from “popular front” should banks as a guarantor, more than 4.8 billion hryvnia 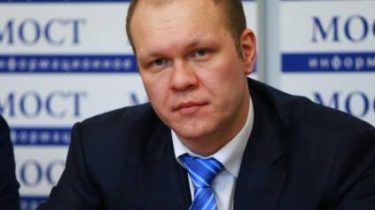 MP from “popular front”, the Deputy Chairman of the parliamentary Committee on financial policy and banking activities, Mr. Denis dzenzerskyy evidence has not confirmed the legality of in 2015 of income in the form of a gift of 35 million UAH. At the same time he made the Declaration that needs three banks as guarantor of more than UAH 4.8 billion.

It is reported by the National Agency for prevention of corruption, based on the results of full audits of declarations. Relevant documents were sent to the National anti-corruption Bureau of Ukraine.

“It was established that the MP is not indicated in the Declaration valid at the end of the reporting period financial obligations in front of three banking institutions for a total amount of 3 billion 185 million 432 thousand UAH 215,78. Such commitments arose from MP on the basis of decisions Oktyabrskogo and Babushkinskiy district courts of the Dnieper, which gained legal force, and which is decided to collect with MP as a guarantor of the obligations, indebtedness under the credit agreements,” – noted in the NACP.

MPs and their mandates. A list of MPs that took prosecutors

Dzenzersky during the explanation, the Agency’s employees “did not deny that he was aware of the open on the basis of relevant court decisions enforcement proceedings and the availability to him as a guarantor of financial obligations, but considers that such commitments must be declared”.

In return for the 2016 MP also did not specify the financial obligations to banks that have already reached 4 billion 823 million UAH 675 th.

In the Declaration for 2015 was specified income in the form of a gift of 35 million UAH, “the validity of the grounds of acquisition of which is not confirmed by evidence. We will remind, responsibility for declaring false information in excess of 250 times the subsistence minimum for able-bodied persons provided in article 366-1, and for unlawful enrichment – article 368-2 of the Criminal code of Ukraine”.

In NACP stressed that “adoption of a well-grounded conclusion and its submission to the specially authorized subject in the sphere of combating corruption does not mean recognition of the person guilty of an offence, and is the basis for the implementation of pre-judicial investigation”.