In Kiev again has banned the entry of trucks Today, 28 February, 17:00, at the entrance to Kiev has banned the movement of trucks. The restriction is temporary and will operate until 22:00.

Restrictions imposed “for the purpose of uninterrupted work to ensure the traffic during the worsening weather conditions and pursuant to the Protocol of the Constant Commission on questions tekhnogenno-ecological safety and emergency situations of the Executive body of the Kiev city administration from the city 28.02.2018 Ask drivers to consider this information when planning their routes. The road service in Kyiv oblast have prepared a list of places for Parking vehicles in the winter period.”

For tomorrow weather forecasters declared storm warning. There will be strong snow, a Blizzard, snow drifts. Night and morning the wind gusts will reach 15-20 m/s. slick On the roads. Night temperature 9-14 ° frost, in the afternoon 3-8 degrees of a frost.

What will be the weather in Ukraine before the end of this week and early next, read on Tsna on this link.

Videodirectsite track and rescue of pregnant women: what is known about the consequences of bad weather in Ukraine

In Poltava chrezvychainyi from snow captivity was freed two ambulances. In Kharkiv piled up to 40 inches of snow. In the Kherson region due to strong winds from the pier tore a small ship. Rescuers using heavy machinery managed to put it on the bottom. In Zaporozhye because of the frost and snow canceled classes in schools. 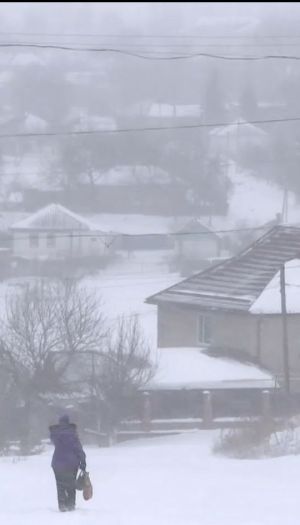