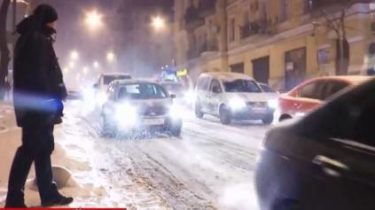 In Kiev on Tuesday evening within a few hours it was snowing. Because of this, the movement in the center about 17:00 PM were very difficult, says the story TSN.19:30.

For an hour the cars covered a distance of 4.5 km, on roads there were many minor accidents, because of this formed tube. It was slippery on the sidewalks, where pedestrians fell, and on the cobblestones of the roadway, which had an accident because all drivers to take into account the traffic situation and kept a safe speed and distance.

For almost three hours covered with snow capital. The movement in the center of the city since five in the evening, almost paralyzed. There have been lots of accidents. 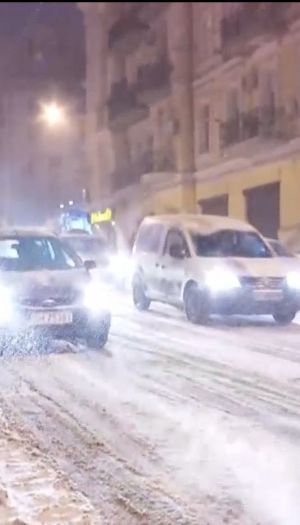 On the tracks were visible the work of the snowplows, which ran for 285 units. However, even this amount of machines, mogao time to quickly clear a large number of the capital’s roads. The utility asked the people of Kiev, despite the snowstorm, to go out and clean off the road parked on the roadside machine that night a technician was able to clear roads in the capital.

Ukraine is approaching another powerful cyclone with snow, and then it will be spring

As previously reported, with the aim of facilitating the work of snowplows and unloading of the main ways the city authorities decided on Wednesday to restrict the entry of heavy freight vehicles in Kiev. In particular, from 5:00 to 10:00 a.m. trucks will not be allowed to drive into the capital