Poroshenko commented on the deprivation of citizenship and deportation Saakashvili 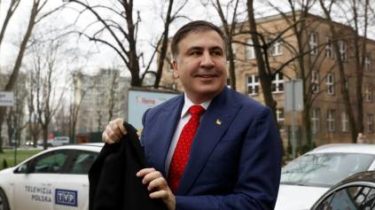 The President of Ukraine Petro Poroshenko said that did not take the passport of the party leader “Rajnovich forces” of Mikheil Saakashvili.

The head of state said today, 28 February, during a press conference in Kiev.

He noted, however, that citizenship gave Saakashvili deliberately. According to Poroshenko, he was like most enchanted by the prospects that Saakashvili might bring to Ukraine.

“I’ve tried to give him all the opportunities. He was Chairman of the Odessa regional state administration, which set out clear objectives for the fight against corruption and reform of the system of government. He was given the opportunity to appoint the head of the Odessa regional police Lortkipanidze was appointed head of the National police Khatia Dekanoidze, Davit Sakvarelidze was appointed as Deputy Prosecutor General, who was responsible for combating corruption and was appointed the Prosecutor of Odessa region, were appointed heads of regional administrations, customs. Asking much. Nobody had such opportunities to demonstrate the result. The results we all saw. They were absent”, – said Poroshenko.

He added that after he received the submission of the relevant competent authorities of violations that were at the time of granting citizenship, he had no other models of action how to stop citizenship under the Constitution.

Videosgallery, gave his first press conference after deportation from Ukraine

The ex-President of Georgia, settled at a budget hotel, is going to visit family in the Netherlands and collected his first press conference. Kept confident and said that he wants to return to Ukraine.

“Who knows, if this check was not, could have remained dreams, ideals. Michael, sorry, I’m sorry about that himself destroyed. I don’t think he’s happy now. But that’s his problem. His case. The only note that issues of readmission from Poland after the breach of the law committed by Saakashvili and a group of other persons when crossing the border, which was confirmed by the court, was carried out perfectly legally”, – said Poroshenko.

Recall, February 12 the leader of the “Movement of new forces”, Mikheil Saakashvili, was detained in the restaurant “Suluguni” in Museum street in Kiev. In the State border service stressed that the politician violated the migration legislation of Ukraine and will be deported to the country of previous stay. In the end, Saakashvili was brought to Poland.

It was transported by plane Beechcraft Premier I of the Polish company “Jetstar”. The cost of the flights amounted to 8.5 thousand dollars. Procedures for the procurement of services for transportation policy in the registers there.

14 February in the Netherlands to Mikheil Saakashvili has issued a documentthat allows him to stay and work in the territory of the European Union. February 16 morning, the ex-President of Georgia Mhel Saakashvili was at the airport in Munich (there was held the international conference on security). TSN journalists met with him in the transit terminal. Later it became known that lawyers Saakashvili appealed to the European court on human rights complaint regarding the illegality of the procedure for the removal of the defendant from Ukraine.