Poroshenko complained that poorer during his presidency 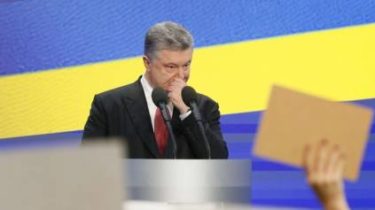 The President of Ukraine Petro Poroshenko, answering the question about how to be President-oligarch in a country where people survive and are on the verge of a humanitarian catastrophe, said that he is the only President of Ukraine, which is poorer during the cadence, but did not agree that the country is a disaster.

“I do not want to discuss his life, but believe me, it’s not sugar. I can say that when I was elected President, my income was much more than now. I’m the only President that has this momentum,” – said Poroshenko during a press conference at the National cultural-art and Museum complex “mystetskyi Arsenal”.

The President did not agree with the opinion about the humanitarian catastrophe in the country and offered to remember life before the beginning of his presidency and life now and to compare life in Mariupol and Donetsk, which is now in non-government controlled areas.

Poroshenko said, how it differs from its predecessors

“A humanitarian disaster of 2014, when I came to power – 15% drop in GDP, 14% of the budget deficit, the absence of the army, 50% inflation, or less than 5 billion zolotarievka reserves, miserable minimum wage, an empty Treasury account, a paralyzed banking system, a paralyzed court proceedings… When you talk about a humanitarian catastrophe, compare Mariupol and Donetsk – 65% unemployment, when children are unable to go to school, medications that are impossible to buy, compare the products which are more expensive and much lower quality compare people how to survive on humanitarian handouts,” said the President.

Poroshenko assured that he has rose-colored glasses and sees the problem in the country. But noted that the authorities managed to increase 7 times the local budgets, but are not used efficiently, on the increase in the consolidated budget of the state.

“You think where did this money out of thin air, or from oligarchs who have finally begun to pay taxes that were not paid. State-owned enterprises began to work for the state, not the oligarchs, but the rates of these processes do not satisfy me”, – assured Poroshenko.