Superhero acts awkward fall and the antics of animals: a most curious recording from the camera home 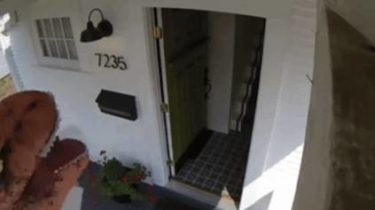 Users Nest Cam, surveillance cameras for their own house, have submitted their entries for the annual prize Nestie. The owners of the cameras were able to capture on video an amazing, fun, bizarre and supernatural moments.

It is reported by DailyMail.

One of the cameras was off, like a shimmering comet flew over the horizon.

The other recorded the dog that tried to climb under the table. But something went wrong and the table fell to the poor.

For another entry you can see how the father like a superhero, rescues her child. The man instantly reacted when he saw that his child will turn over a wardrobe.

A camera mounted on someone’s doorstep, seized the moment when the car suddenly loses control and rolls over on his side.

Another entry shows what happens when you underestimate the size of his dinosaur costume.

A camera mounted in the cafe, removed the bad men who tried to ride gyrometer.

On another video you can see two men and two dogs celebrating a goal scored.

“This year’s Nest has received more than 300 applications from users, and we continue the tradition Nesties annual Awards to reward our loyal customers and to share the best moments”, – said the representative of the company.

“Although Nest Cams made in order to help the house to become safer, the award Nestie demonstrates how the camera helps people to catch something unexpected,” he added.

Recall that the Network revealed the story of the very first viral video. It took took off in the U.S. in 1997 – the footage shows a man furiously smashing his computer at the workplace.