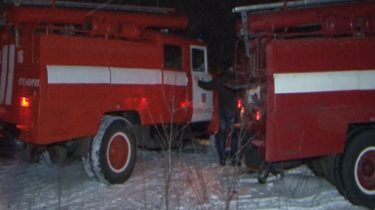 On the night of March 2 in the Svyatoshinsky district of Kiev burned the wooden Church of the UOC (KP).

This was reported by press-service of head Department gschs of capital.

It is noted that the fire was contained at 4:02, and removed at 4:20. Details of the incident and the cause of the fire is now being investigated.

It is known that as a result of sudden fire was instantly damaged the roof, Church things, a fan and electric heater. From the building there were only walls, but without casualties.

The fire was fought for 12 fire personnel of the Kiev garrison, armed with three units. The Church is located on the street of Academician Efremov, 26. Near the temple there is a gas station.

We will remind, recently in Ternopil there was a fire in a children’s hospital. Through the incident patients had to be evacuated. Injured worker files, it burns the fingers. According to doctors lit up in the hospital archive, which is housed in the basement.