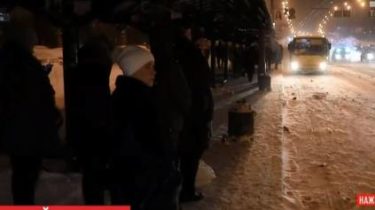 In Kiev, due to snowfall, many people are moved from private cars to public transport and was dissatisfied with his work. According to the interviewed journalist of the citizens, the roads could be cleared better and the number of buses and trolleybuses on routes should take into account the growth of passenger traffic, according to a story TSN.19:30.

Despite reports of Internet services about the continuous traffic jams in the city center, in fact, the situation on the roads in the evening rush hour had not been so tragic. All sleeping areas you could really get transport moving more slowly, but without long stops. But the plugs were in the pedestrian area – at bus stops accumulated people who waited a long time for the desired bus, trolleybus or tram.

Due to the Blizzard, the capital was in a traffic jam, but rather, they arose not because of the weather, and as a result of the rush hour, because people come back from work. Kiev, which left the machine at home for hours waiting for public transport and complain about the work of public utilities. 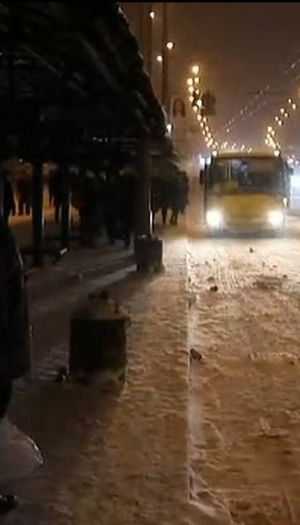 It was the drivers who decided, given the weather and the recommendations of the municipal authorities to use public transport mainly and expressed their dissatisfaction. “In the morning, got three hours,” – says one of the girls from Kyiv. Took advantage of the situation, according to tradition, the taxi drivers who raised fares in two or even three times. And people were willing to pay the money to get to work or home.

In Kiev, due to the snowy weather canceled classes in schools, Klitschko is calling the army for help

As previously reported, on 1 March travel on the roads of the capital was hampered due to weather conditions. Tube was observed at all entrances to Kyiv. In addition, heavy travel through all the bridges, and the most difficult situation with traffic on the bridge Paton in the direction of the centre.