Falling icicles and ice: residents of Kiev warned of a new danger 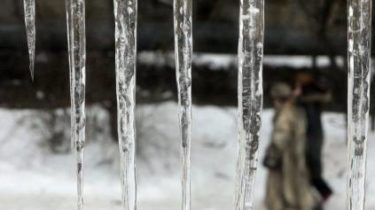 In Kiev on Sunday, March 4, due to temperature changes is expected black ice and there is a danger of falling icicles from the roofs.

This is with reference to Ukrgidromettsentr’s data was reported in the press service of the Kyiv city state administration.

“As a result of temperature gradients on roofs of houses, parts of houses that act, and in the large trees formed ice icicles. It is therefore particularly dangerous is stay near the roofs and roofs of buildings – it is possible to drop snow, ice and icicles,” – said in the message.

In this regard, the KSCA has appealed to the people to be attentive and careful while walking, do not go beyond fences, but where they are not – to pay attention to the presence of ice and snow on rooftops and trees.

“If while driving you hear a suspicious noise from above, in any case impossible to stop, raise his head and look at what happens, perhaps it’s the snow or blocks of ice; escape from the building too, you need to hug the wall, the peak of the roof will serve as a shelter”, – said in the KSCA.

Besides, urged drivers not to Park near their homes, and to adhere to speed limits and distance, not to forget to turn the Parking lights or fog lights; not to use the road with summer tires.

We will remind, on Saturday, March 3, in Ukraine came another cyclone with heavy snowfall and blizzards. As a result of his influence in Ukraine is expected severe weather conditions: in the southern, Eastern, most Central regions will snow heavily with the transition into rain, sleet sticking, ice.