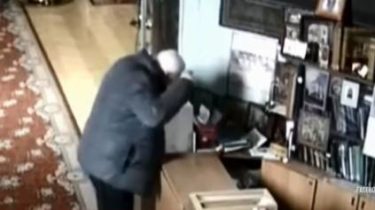 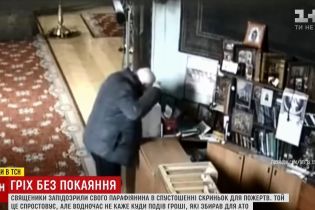 A detective story unfolded in the Church of St. Nicholas Naberezhny at the hem. There priests of the Ukrainian Autocephalous Orthodox Church believer suspected in the theft of Church funds, says the story TSN.19:30.

“It is in our temple to 20 years. Voluntarily went to the altar to help,” says Dean Stephen Yaremchuk. The man was on duty in the temple at night as a security guard. The parishioners and clergy trusted him, although it later turned out that he did not know his real name. He introduced himself as Igor M. Kosinski, while after the scandal called reporters name – Scythe.

The Treasurer noticed a commotion inside the boxes for donations in one of the churches of the capital. The priests had to install surveillance cameras. The video is actually recorded the man whom the priests were trusted as yourself. A believer in digging the victims of the parishioners. TSN was able to communicate with the suspect, but he told his version of events. 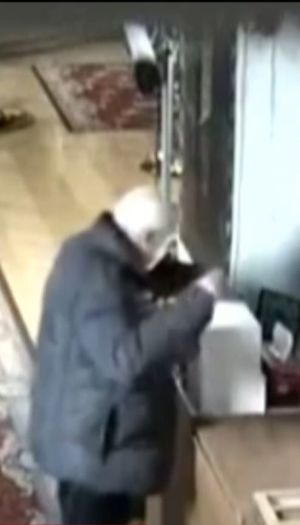 The strange contents of the boxes, the Treasurer of the temple for the first time drew attention a few years ago. “When the money is down, they fold like leaves in autumn, and when you like them, then they will be in place. There’s always someone poking around. Sometimes, the card put on the bottom – and on top of it,” – said Nina Proskura. Find out what’s the matter, the Church decided with the help of video surveillance cameras and seen priests stunned. With lights and wire boxes skillfully night broke into someone they might think last.

Igor lives in a modest apartment on the outskirts of the city. Reporters said that the priests were seduced. “I caught them repeatedly that I enclose the money in sight. I pulled them out, and then put it back. From the temple the money does not come out. They provoked me, provoked constantly. Think of it as a kind of quixotic,” he explained his behavior in a man. But parishioners say that this gray-haired venerable parishioner was collected and in hand – ostensibly for the support of soldiers ATO. According to the people in the temple, for the purchase of a thermal imager, but the person involved in the scandal says more. “I have the money transferred to the medical unit. Not in Kiev”, – said he refused to specify where.

The broken Nativity scene scattered books and bowel movements: in the Odessa region unknown destroyed a temple of the UOC-MP

The priests after seeing the video called the police, but there just shrugged. “We have not established prejudice. We understand that people throw money. It is not taken into account, and we can’t figure out which was damaged and whether the damage,” – said the head of the Podolsk Department Vladislav Ishchenko. Therefore, the clergy of the Church of the UAOC draws the attention of the other priests on the suspicious man to the other churches do not become victims of credulity and guard themselves from hypothetical theft.