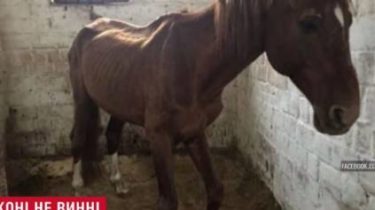 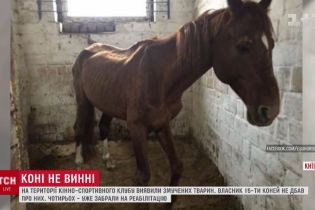 The owner of the animals denies the charges.

In Kyiv on the territory of the equestrian club found the exhausted animal. Volunteers say the owner of 15 goals does not feed them properly, so I urge concerned people to save the exhausted animals. But despite this, the owner and then leases them and earns them money, says the story TSN.19:30.

Horse Joruga brought to the stables other horse-sports club from the previous home for rehabilitation. About the horse owner of the animal a new home Oleg Ostrikov learned from social networks. Where the horse used to live, were the others. Their photos were distributed by volunteers. Animals from starvation sticking out ribs.

Owner – President of the Amateurs of equestrian sport of Ukraine Oleksandr Kovalchuk, Oleg knows personally. I never would have thought that they almost ruin. Kovalchuk remained fourteen thoroughbred horses.

“2-3 months without food. The only thing that Thank God that he all the time was water”, – tells about the horse, his Savior.

Horses from starvation sticking out ribs. Volunteers say the owner of 15 goals does not feed them properly, so I urge concerned people to save the exhausted animals. But despite this, the owner and then rents them out and makes horse money. 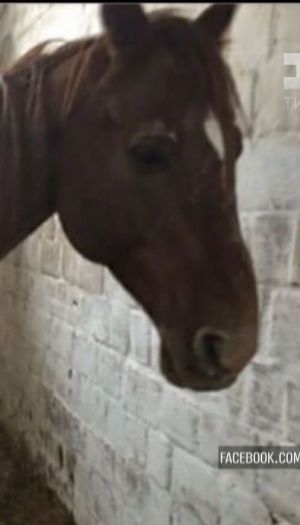 The stables in which the horse lives Artek, Kovalchuk shoots. Artek master leases. Svetlana feeds the animal for the tenant.

“Feed the poor. Straw and oil cake from under the oats. When the oats are crushed, the shell remains – and this feed. And have hay and oats,” says the breeder Svetlana.

The equestrian Federation of Kyiv convened the Commission. The hands have the insights of veterinarians that the condition of the horses and really horrible, they need to feed.

The owner was persuaded to pass three more horses for fattening to another club outside the city. For an indefinite period. The head of the Metropolitan equestrian schools, stables which keeps the animal Alexander, the situation denies.

“We do not have any relationship. Man rents the stables. With their horses. With your feed,” – says the owner of the club.

Alexander Kovalchuk in a telephone conversation does not seem to understand what was going on and this has never happened.

If the owner of the horses not come to their senses, breeders will write a statement to the police. Since August of last year in Ukraine increased liability for cruelty to animals. Now bullying can go to jail for a period up to eight years.