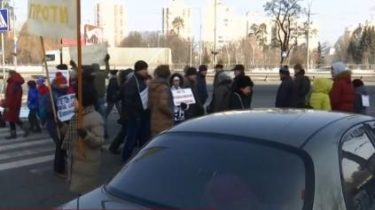 The inhabitants of the outskirts of the city were protesting against illegal, in their opinion, the construction of the Park.

In Kiev Svyatoshinsky area residents on Saturday blocked the Zhytomyr highwaybecause he protested against the illegal construction being done near the road. The locals were convinced that the construction of apartment buildings at the intersection of Lviv and Picturesque can hurt another space next door, says the story TSN.19:30.

In the autumn of last year, activists came out to defend then another square around which the developer has erected a fence, but met resistance from the guys of a sports Constitution. Then in the course went fists and smoke bombs, the construction has not stopped. Residents claim that under the earth there are floaters, so to build such a large object on such doubtful ground is extremely dangerous.

Police for a long time did not go to a call about road closures, so every few minutes between the drivers and the activists of the emerging conflicts. Militiamen arrived only 40 minutes after the call, but people are assured that they are acting within the law. Its action of Kiev called helpful and finally unblocked the road. But if the local authority does not pay attention, the protesters have threatened to block one of the main highways of the country on a weekday.

Run over pedestrians, obscene language, nervous drivers – and all this in the morning. Dissatisfied with the blocked one of the main routes of Kyiv – Zhytomyr. At this protest, people came out because of illegal building, which is close to the road. Convinced high-rise building, which is being built, can damage other premises nearby. 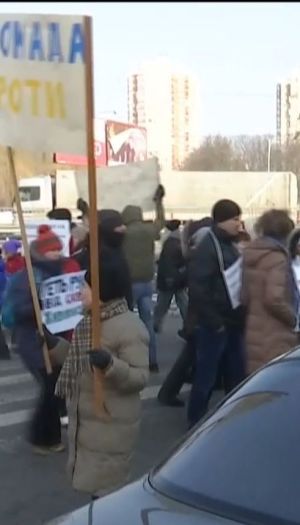