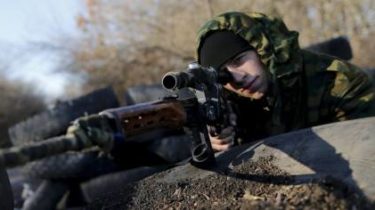 The military rescued the mangled car under cover of darkness.

Nearly fifty recorded attacks on the headquarters of the ATO along the demarcation line during the day. In the Luhansk region heavy firing rocket-propelled grenades and heavy machine guns occurred in the area of the Trinity, of the village of Lugansk and the village of Lugansk, said in the story TSN.19:30.

But in the sector of “Donetsk” the earth shook from explosions of artillery shells – in particular, the plant and its surroundings are destroying mortar volleys. Rocket-propelled grenades and heavy machine guns does not stop the fire on the defenders of the Heater of the mine Butovka, Pavlopol and Sand. Small arms fire continues in Shyrokyne, Talakovka and Hnutove.

In danger a civilian again, because just at rush hour on the Maryinsky checkpoint, an enemy sniper shot the truck which delivers to the city drinking water. “First, the windshield, the barrel but since the barrel is not lit, began to beat on Baku. The tank also caught fire. Well, and destroyed the car – the engine began to beat. Waited until dark, then pulled the car,” said the driver of the water truck 30-th mechanized brigade Yuri Chekmasov.

Videobrasil sniper shot the truck which delivered the water in Marinka

Nearly fifty recorded attacks the headquarters of the atoms along the line of demarcation. In Luhansk – a barrage of attacks from rocket-propelled grenades and heavy machine guns. The plant and its surroundings are destroying mortar volleys. Just at rush hour on the Maryinsky CAT enemy sniper shot the truck which delivers to the city drinking water. 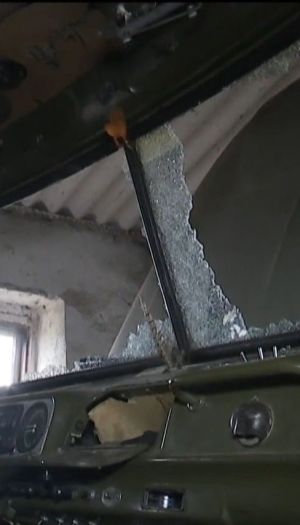