In the Amazon forest found dozens of unknown villages with roads 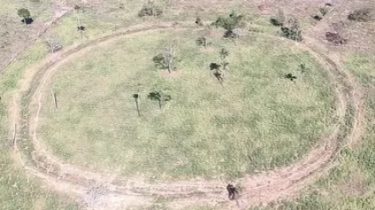 In the Amazon forest found dozens of unknown villages with roads

The researchers said that this new research absolutely discreditied former low estimates of 1.5 – 2 million inhabitants for a basin.

Archaeologists announced the discovery of 81 previously unknown, lost villages of a small part of the Amazon, which generally cover more than 2.1 million square miles of tropical terrain in eight countries, including Brazil, Peru and Ecuador. About it reports USA Today.

In addition to the villages was also open roads and farms. The study pointed out that also have data from hundreds of other villages that have not yet been discovered in the Amazon.

Scientists say that before the Europeans arrived in the late 1400’s and early 1500-ies in the southern part of the Amazon rainforest was once home to between 500,000 and 1 million people.

This means that many more people could live in the Amazon than previously thought. The researchers write that this new study “brand discreditied former low estimates of 1.5 – 2 million inhabitants for the entire basin.”

The discovery fills a large gap in the history of the Amazon and provides further evidence that rain forest, which was once considered pristine, in fact, greatly influenced those who lived there.

“There is a General misconception that the Amazon is incomparable landscape, the house is scattered, nomadic communities,” said researcher Jonas Gregorio de Souza, archaeologist Exeter University. “It is not. We found that some settlements next to large rivers is much greater than we originally thought, and these people have affected the environment,” – said the researcher.

Using satellite imagery and then in-person interviews, the researchers found the remains of villages and the mysterious work known as geoglyphs, the artificial ditches with a strange square, circular or hexagonal shapes, the purpose of which remains unknown.

In the Amazon could disappear half the trees

After the centuries they were hidden, these strange forms over the last few years have become visible due to deforestation.

“Our research shows that we need to rethink the history of Amazon,” said study co-author josé Iriarte.

Recall that in the Amazon jungle living was a canadian, whom relatives had not thought ever to see again. Male 5 years wandering the continents with 10 thousand miles on foot.