“The expected move by the Kremlin”. The foreign Ministry of Ukraine reacted to the expulsion of diplomats from Russia 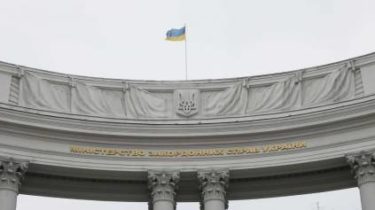 “The expected move by the Kremlin”. The foreign Ministry of Ukraine reacted to the expulsion of diplomats from Russia

RF mirror to expel 13 of the Ukrainian diplomats.

Russia expels from the territory of the country 13 Ukrainian diplomats for the fact that Ukraine supported such a move in the UK after the poisoning of a former agent Sergei Skripal and his daughter Julia.

This was stated by the foreign Ministry of Ukraine.

“On March 30 the Ministry of foreign Affairs of the Russian Federation reported that 13 Ukrainian diplomats should leave the country. This is an expected move by the Kremlin, which has long openly shows the world the violation of international law, considers it possible to conduct an aggressive undeclared war, to interfere in the internal Affairs of sovereign countries that violate the rights and freedoms of citizens, including their inalienable right to life”, – said in a statement.

The Ministry also noted that Ukraine had recently sent 13 Russian diplomats as they carried out in the country for activities incompatible with diplomatic status.

“It was a gesture of solidarity with partners in response to reasonable suspicions concerning the responsibility of Russia for the Commission of gross violations of international law and the non – use of weapons of mass destruction against the civilian population in peacetime. It should be emphasized that this is the first daring use of chemical weapons in Europe since the Second world war”, – stressed the foreign Ministry of Ukraine.

According to Ukrainian diplomats, the tragedy in Salisbury is a continuation of the aggressive policy of Moscow aimed at violating the sovereignty of foreign States and undermine international law.

“Russia’s actions indicate that its leadership continues to live in a false world of illusions and stubbornly holds the line to the isolation from the civilized world. We are convinced of the effectiveness of international solidarity in response to the constant provocations and the violations of the Russian Federation in the international arena and encourage our foreign partners to continue coordinated pressure in the form of practical steps that will limit the ability of the Kremlin to continue aggressive actions”, – added in Department.

Separately, the Ministry of foreign Affairs has assured that Ukraine is undertaking and will continue to take all measures to counter and prevent the system and constant interference, subversive activities of RF in Ukraine, in particular by declaring persona non grata persons suspected of involvement in such misconduct.

We will remind, on Monday, 26 March, Western countries have announced the expulsion of Russian diplomats. The expulsion of diplomats was a response to the attempted poisoning of a former intelligence officer Sergei Skripal and his daughter in the UK, which, according to the British investigation, is Moscow. First about the expulsion of Russian diplomats, announced, in fact, the UK (23 diplomats), then it was joined by 15 countries EU, USA, Canada, Norway and Ukraine. Austria, Slovenia and Bulgaria such measures not taken. 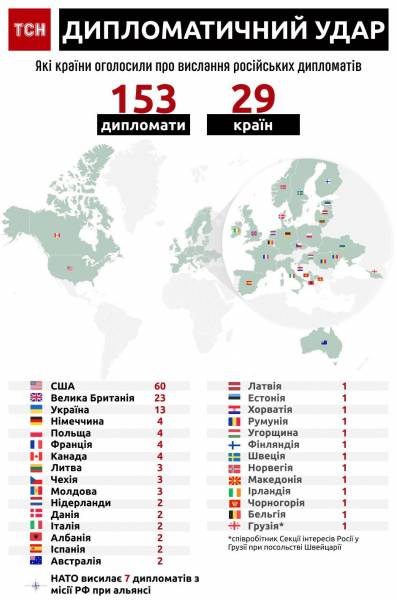