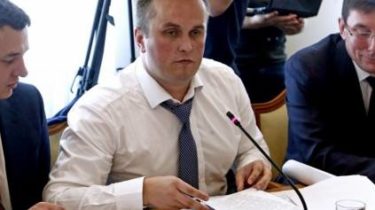 Head of SAP does not want to provide samples of the voice to investigate.

The head of the Specialized anti-corruption prosecutors Nazar Golodnitsky refused to provide voice samples to the Department for investigation of particularly important cases in the economic sphere of the Prosecutor General.

He stated this during a briefing near the building of the Department.

According to the head of SAP, he was “ready to give all the readings”.

In addition, Holodnitsky told that the criminal proceedings against him are investigated by the Department under two articles: “forced to testify” and “disclosure of pre-trial investigation or inquiry”.

The basis for opening of criminal proceedings against the head of the Specialized anti-corruption Prosecutor’s office of Nazar Golodnitsky was to obtain information that it hinders the investigation on “Odessa case”.