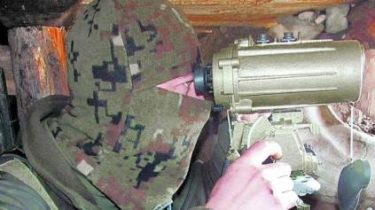 Thursday, April 5, in the area of ATO in the Donbas the militants 10 times shelled the positions of Ukrainian army.

“The Russian occupation forces continue to ignore the agreements of the Tripartite contact group on the complete ceasefire during the Easter holidays. Since the beginning of the day, the aggressor made 10 attacks on Ukrainian strongholds,” reads the summary of the press center of staff ATO.

On Lugansk the direction from 82-mm mortars fighters fired at the Ukrainian positions in the area of Trinity, and from heavy machine guns and small arms – near Novozvanovka.

On the Donetsk direction the rocket-propelled grenades and small arms militants shelled the fortifications of the ATO forces near the Water, Novotroitsk, the Town and the mine Butovka. Defenders of Water were sniper fire, and small arms fighters fired at positions near Pavlopol.

During the shelling one Ukrainian soldier was injured.

“Our defenders on the line of differentiation of the parties to continue to reliably control the enemy, while unswervingly adhere to the terms Easter truce”, – noted in the headquarters of ATO.

Meanwhile, the President of Ukraine Petro Poroshenko announced the date of completion of the ATO.