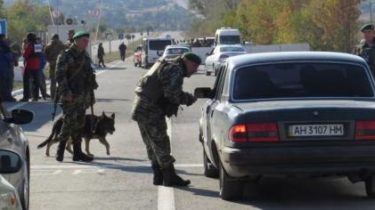 On checkpoints from the temporarily occupied territories , the representatives of illegal armed groups require a fee for acceleration of the movement.

This is stated in the message the press service the state border service.

“Recently there has been unevenness of passenger traffic through PPC, especially “Novotroitsk”. Citizens, as private vehicles and buses, are arriving in significant quantities every half hour-hour. As noted by the travellers themselves – a situation created by the representatives of the NFP, establishing their own business. For the acceleration they require a fee,” it said.

In addition, people described the “taxes” the militants for accelerated passage and the inhuman conditions in which you have to cross the line of collision in social networks.

In particular, it is noted that the drivers of Shuttle buses that ply through KPVV, “share with “guards DNR” – 1000 rubles per bus and 50 for each passenger”.

“Before the Easter holidays, the traffic flow becomes more intense. Ukrainian border guards have repeatedly faced with situations where shortly before closing time PPC from the temporarily occupied territory came a large number of people. If necessary, increasing the number of border duties that the citizens had the possibility to cross the line of demarcation and did not remain in the “gray area” after the closing of KPVV,” said the border guard service.