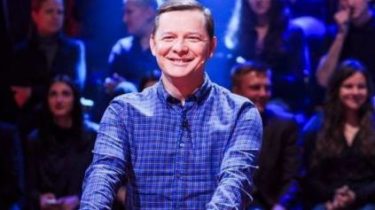 His common-law wife gave me an ultimatum.

The leader of Radical party Oleg Lyashko decided to marry. On April 8 he proposed to his civil wife Rosita, Sairanen.

“Today I took my Rosita a very serious proposition. At this point we went 20 years!” – wrote Lyashko on his page in Facebook and published the video as it was happening.

Sitting at the table with the family, Oleg Lyashko said that on June 2 comes with Rositas to sign. “We have the same child will soon be married, and we just decided to go to sign,” said the radical.

“For 20 years I was thinking whether to do it. I would like another 20 years to think about, but Rosita is not given. Set an ultimatum: either come, or think with another. And we don’t need another, we need the best,” – said the MP.

Rosita said this now she need a dress and a ring to buy, what Lyashko jokingly said that she carefully read his Declaration. “Judging by your Declaration, you have the ring and all you have.”

We will remind, the head of the “Radical party” Oleg Lyashko has filled his Declaration — according to the document he 20,6 million UAH of income and 484 thousands of dollars cash. According to the Declaration on the website NACP, his salary in 2017 amounted to 259,3 thousand UAH, 252,8 thousand — ensuring Deputy activity. 1.8 million hryvnia Lyashko received as interest from investments in “Oshchadbank” and the Bank “arcade”, 571 thousand — his winning the lottery “Favorite sports” 1.9 million UAH — the income from providing property to rent and 15.9 million hryvnias — income from the alienation of property.