The militants continue to shoot at the Donetsk direction. Chronicle of the ATO 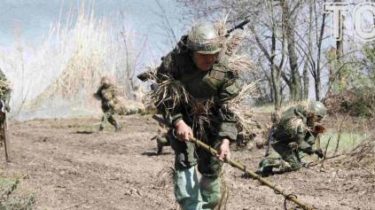 The militants continue to shoot at the Donetsk direction. Chronicle of the ATO

Information on wounded Ukrainian soldiers there.

For Wednesday, April 11, in the area of ATO in the Donbas the militants 13 times violated the ceasefire.

“Since the early days of the Russian occupation troops have carried out 13 attacks on Ukrainian strongholds, using forbidden weapons Minsk agreement. As a result of enemy shelling, one Ukrainian soldier was injured”, – stated in the summary of the press center of staff ATO.

On Donetsk the direction from the forbidden 120-mm and 82-mm mortars, grenade launchers, heavy machine guns and weapons of infantry fighting vehicles militants fired on the Ukrainian fortifications in the Sand. In the area of the Heater they used tank weapons, rocket-propelled grenades – near Avdeevka, Marinka and Talakivka, and heavy machine guns – near Pavlopol, Gotovogo and Water. Ukrainian army positions near Avdeevka, Water and Gotovogo fighters fired from small arms, and in the area of Marinka sniper fire was conducted.

On Lugansk the direction from the beginning of the day today the militants did not shoot.

We will remind, yesterday, and the day in the Donbass were injured, five Ukrainian soldiers.