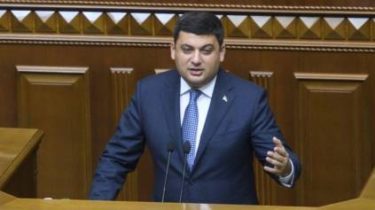 The Pro-presidential faction wants the government appeared, the Minister of health.

Next week the government of Prime Minister Vladimir Groisman will report to the deputies of the Verkhovna Rada.

This was stated by first Deputy Chairman of the faction “Block of Petro Poroshenko”, people’s Deputy of Ukraine Igor Kononenko, reports the press service of the party.

“As far as I know – is planned for next week report. Apparently, the MPs have any questions. The Parliament has the right to take certain decisions. But first you need to wait for the report”, – he told on air of TV channel “112 Ukraine”.

Kononenko noted that the government still has no Minister of health – Suprun performs its duties.

“All of uncertain fear.” Suprun told, who benefits from her dismissal and what it can mean

“The position of our party that the government should have a Minister of health, not the acting Minister! It’s been almost six months since we voted in Parliament for the reform, which is gradually being implemented. Therefore, at this critical time for Ukraine, the government should be with the Minister of health. The Prime Minister must submit to Parliament candidate, and deputies will decide”, – said Kononenko.

Among the names of those who can replace the call by the acting Minister of health Uliana Suprun, Finance Minister Alexander danyluk, acting Minister of agriculture Maxim Martyniuk. So, the people’s Deputy from the Bloc of Petro Poroshenko Konstantin Arinich can appoint the head of the Ministry. According to the source, the Minister of Finance can become an MP from Pro-presidential faction Nina yuzhanina, and the Ministry of agrarian policy and food of Ukraine remains under the quota group “BLOW”.

the press service of the party “the BPP Solidarity”