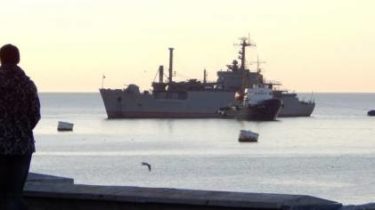 Intelligence headquarters of the Antiterrorist operation declared the revitalization of the ships of a Coast guard of Frontier service of FSB and the black sea fleet of the Russian Navy in the sea of Azov.

“In this area there is a number of measures on strengthening of grouping of the Russian ships and auxiliary vessels. Probably the main purpose of such actions may be symmetric measures on detention of the State border service of Ukraine, Azov sea, fishing boat “Nord”, – stated in the message.

Earlier, the Russian media reported that the command of the black sea fleet of the Russian Federation is considering a permanent presence in the sea of Azov from-for arrest of the vessel “Nord”.

Recall, March 25, in the Ukrainian waters of the Azov sea border guards detained the ship from the occupied Crimea, which was engaged in fishing under the flag of the Russian Federation. Fishing boat “Nord” was 15 miles from the Obitochnaya spit. A crew of 10 people were engaged in fishing and managed to catch more than 5 tons of seafood. After the detention it turned out that the ship prescribed in the occupied territory, i.e., in the Crimea, and the fishermen were passports of the Russian Federation issued in Kerch.

Ukrainian court on March 30 arrested the vessel “Nord”. The members of the teams were made up administrative protocols, and captain Vladimir Gorbenko was charged with “violation of procedure for entry the temporarily occupied territory of Ukraine and departure from it with the purpose of causing harm to the interests of the state” and faces up to five years of imprisonment.

Kherson city court chose Gorbenko a measure of restraint in form of detention for two months with a right of Deposit.

The Federal security service of the Russian Federation has opened a criminal case under article of the Russian Criminal code “hijacking an aircraft, sea vessel or railway rolling stock”.

On April 10 the court in Kherson was released on bail the captain of the ship “North” from the occupied Crimea, Vladimir Gorbenko. On the same day, the Crimean Prosecutor’s office (subordinated to the Prosecutor General of Ukraine) reported another suspect – according to the article 249 of the Criminal code of Ukraine (illegal occupation of fish, animal or other water extracting craft).

April 11, in the case of illegal fishing, the court held the measure of restraint in the form of personal commitment. The captain should not leave the outside of Kherson (in the previous measure was in Kherson and Zaporizhia region, that is, he narrowed them down) and to appear at all hearings and investigative activities.

Videomovie case: the captain of the ship “Nord” accused of illegal fishing

The captain of the Crimean fishing vessel was detained by border guards in the Azov sea for violation of the ruled away from the occupied Crimea, on the eve was released from jail on bail 35 thousand hryvnia. Now the captain is waiting for appointment of the hearing on the second criminal production of illegal fishing. All members of the crew are on the case as witnesses. 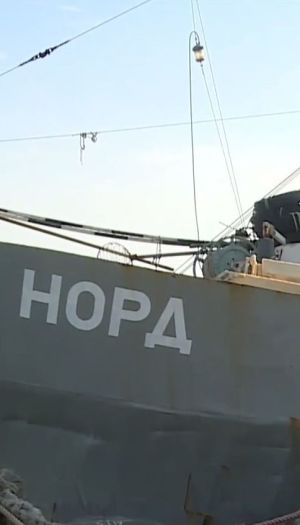